How America’s Broadband Ranks and Why Adopting Fiber is Essential

A publication by the Information Technology and Innovation Foundation in February 2013 paints a concerning picture for the state of America’s broadband infrastructure in comparison to other countries.

How the United States Trails other Countries

While the United States is an international leader in entry-level pricing of broadband, ranking first in 2008 and second in 2010 among OECD (Organisation for Economic Co-operation and Development) member countries, the United States trails other developed countries in many other metrics.

For example, the Net Index by Ookla ranks the United States at 34th place in average download speed behind countries such as Japan, Korea, Switzerland, and Luxembourg. There is a graphical representation of this data below with the y-axis being the number of megabits per second 1. 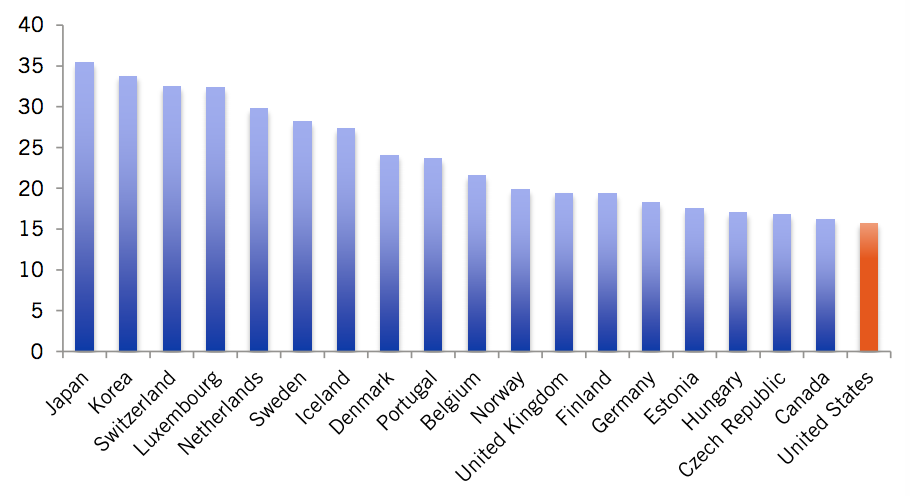 And although the United States ranks at the top for entry-level broadband pricing, it ranks closer to the end of the affordability spectrum as speeds increase. Below is a chart from a Congressional Research Service report that was released in March 2013 2.

Why Does the United States’ High-Priced Network Trail Others?

To properly discuss why the United States’ broadband prices are higher would require an economic comparison that is out of the focus of this article. But, it would be constructive to discuss how the United States could take advantage of fiber broadband networks to become more competitive.

How Can the United States Become more Competitive

Eric Savitz of Forbes states that, “To maintain U.S. leadership in innovation, we need to keep pushing for faster broadband networks, and we need a critical mass of innovation hubs that offer homes and businesses access to gigabit broadband. This would bring supercomputing power to Internet users, and would drive inventions we can only barely anticipate 3.”

Savitz’s recommendation that we push for faster broadband networks and for the adoption of gigabit broadband is a sound one because, as Savitz says, it would make things such as supercomputing a reality for consumers.
The issue is that fiber is expensive. Sure, from a consumer’s perspective, the pricing of broadband is on par or slightly above its cable counterparts 4. But for broadband companies, fiber to the home is much more expensive. For example, it is estimated that Google will invest $19.8 billion to $28 billion to install fiber to the home in Kansas City.

The best way to push the United States to become more competitive is for consumers to vote with their wallets. Those that have access to fiber should take advantage of that. Those that do not have access to fiber should request it.
Broadband companies are a business, and with enough consumer interest, they are sure to consider expanding fiber to more communities. With this expansion, innovation is likely to follow.
We also must pressure local governments to consider building their own fiber networks. Municipalities can focus on their residents rather than maximizing profits. There are many cases (http://www.ilsr.org/broadband-speed-light/) where such networks have been very successful. In fact, typically this local projects are able to deliver faster speeds at lower cost to consumers than any of the large broadband providers in the U.S.