Who is Winning the Google Fiber Race?[Updated Daily]

Welcome to our first installment of our Google fiber optic tracking report. This report will features news and updates over time to reflect that status of the various communities that are all vying for Google’s attention, but this initial report will serve as a general overview of what this project is and how it works.In essence, the Google Fiber Optic race can be viewed in many ways. The way we have chosen to look at the race, at least initially, is by using popular social networking sites as metrics for the actual interest level in Google’s fiber optic broadband service and data gathered from the U.S. Census Bureau for population statistics.

Update Nov 2015: In the years since tracking the deployment of Google Fiber, Google has decided to continue to expand to more and more new cities. You can see their expansion plans on this page: https://fiber.google.com/newcities/. Additionally, there may be a chance that Municipal fiber may be on it’s way to your city.

Update Aug 2011: So as you may have heard Google selected Kansas City, Kansas for the initial deployment of its fiber gigabit service. For all the other towns vying for fiber, don’t give up, they may expand to more cities in the future depending on how the first deployment goes. In the meantime, if you’re lucky enough to be in area where Fios (from Verizon) is available, http://www.defefx.com/fios-deals/ shows how you can save the most on Verizon’s fiber service.

The graph below depicts the top 15 cities measured by community support levels. The community support levels are calculated by taking the single social networking source with the largest following and dividing by the population of the city. Social networking sources include Facebook Pages (the fan count), Facebook Groups (the member count), and Twitter followers. This graph will change automatically as new data is accumulated. 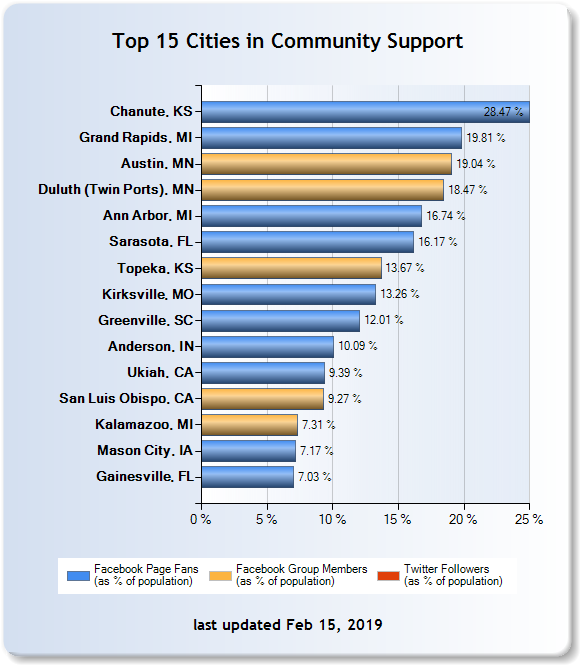 The next graph show which cities have posted the largest increase in supporters over the past week. The supporter counts are a sum of the three social networking sources: Facebook Page fans + Facebook Group members + Twitter followers. 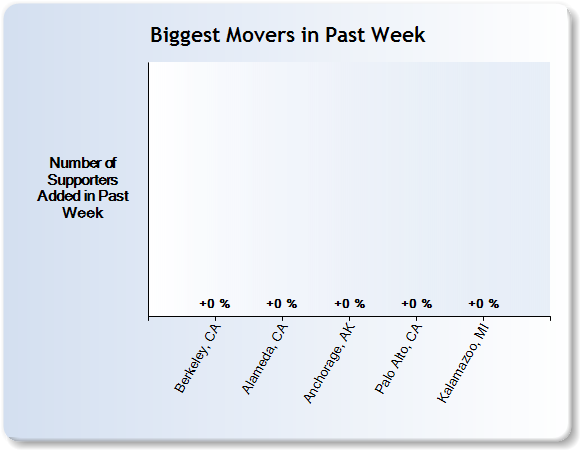 While the Overall Leaders graph uses population to make the comparison more fair, it’s still fun to see which cities have the largest actual number of supporters, which is exactly what the next graph shows. 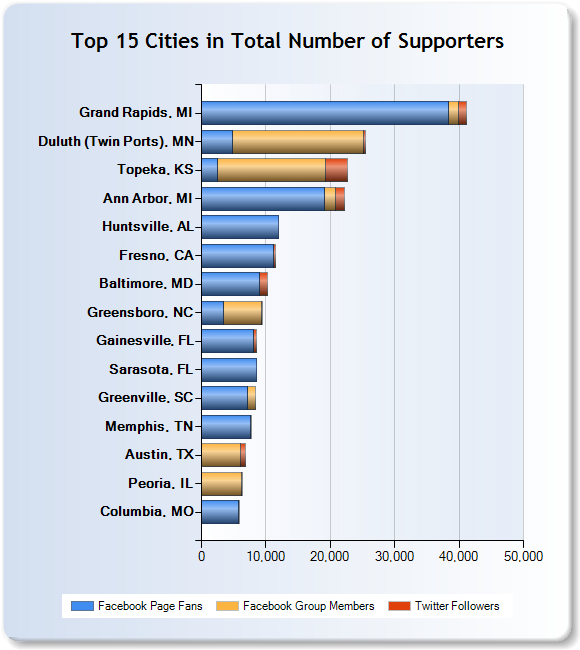 Social Networking as a Benchmark

In essence, the Google Fiber Optic race can be viewed in many ways. The way we have chosen to look at the race, at least initially, is by using popular social networking sites as metrics for the actual interest level in Google’s fiber optic broadband service and data gathered from the U.S. Census Bureau for population statistics.

The reason that social networking sites were used to gather honest information regarding community interest in Google’s fiber optic campaigns is fairly simple. One reason has to do with the alternative, which is online voting or polling. Well, that method can and has been easily manipulated in the past. There are numerous examples of people writing scripts or manually influencing such metrics. That is not to say that it is impossible to fool social networking sites, but the process is a little bit more difficult. Additionally, Google themselves have been monitoring the social networking scene, which tends to make it not only more relevant than a proprietary setup, but it also acts as a sort of data-police. Google already has advanced social networking/benchmarking algorithms designed to foil attempts to manipulate social networking data.

Even though the users of social network sites may not represent a large demographic of the population, we feel it is exactly the demographic that Google is interested in gauging. These users represent the first adopters of technologies like fiber-to-the-home. These are the users that would actually make use of a Google gigabit connection, and will foster the progression of next-generation web applications, which is exactly what Google has set out to do.

When it comes to population, the U.S. Census Bureau is the definitive source, and that is where all of our population statistics come from. While some of the data is a few years old, there really seems to be no fairer metric than this. Hopefully everyone will be filling out their new U.S. Census Bureau registration cards in the immediate future. A few acknowledgments are in order, however, before continuing further.

The first is that cities with smaller populations are probably more prone to percentage based fluctuations than cities with larger populations. This is a given, but it is something that we have not found a great way of solving. The simple fact is that a town of 1000 could increase or decrease population based on the activity of employers or just particularly amorous couples much more so than a town with 100,000 residents. The other issue is that some cities have updated their U.S. Census Bureau data more recently than others. In all cases, we used the most recent data possible. Why did some cities update more recently than others? That is a good question, and one we hope to answer in the future, but ultimately these two problems should not make any large difference to our reporting for a few reasons.

The first reason is that only cities with a certain number of fans/followers/members are being tracked. This means that incredibly small towns might be left out of the equation, but that is nothing new or noteworthy; Google is looking to serve a minimum of 50,000 people. Sorry towns of 1,000, but Google will not be picking you exclusively, though there is a lot of hope that you will be served by Google picking a larger region and servicing your needs as part of that choice. For our metrics, we decided to focus more on the idea that Google would be picking larger towns and this naturally means that we had to make a cutoff in terms of population as well as a cutoff in terms of fans/followers/members. Secondly, getting back to the population vs. growth issue, these larger towns are (as previously mentioned) less prone to radical changes in population. In short, we think the Census Bureau data is reliable for our purposes.

Many people might wonder why population information was considered at all. The reason is fairly simple: desire. How bad an individual wants something can be figuratively measured by the fibers of their being, and a macro version of this is substantially more literal; how many people within a community want something bad enough to go through the minimal effort of signing into a social networking service and becoming a fan or member? It does not seem difficult, but it certainly shows intent. This intent divided by the number of people in a community should be a reasonable way to gauge the desire of that community as a whole for Google’s gigabit fiber optic service.

Since we initially started Google Fiber’s expansion hundreds of small municipal broadband networks have popped up.

While Google has stated that it is slowing down it’s rollout, the attention Google brought to the need for fastest broadband didn’t go unnoticed. Today many small cities also have regional for profit providers that have risen up to meet consumer demand.

A good example of these providers is MetroNet which serves parts of Illinois and Indiana. They offer gigabit speeds for less than $100/mo. They’re also regularly listed in the top 100 fastest internet providers in the US.

Are there any regional providers that are making waves in your area? If so, leave them in the comments and we’ll include them in this resource.