Big Metal vs. The Little Guys

With the broadband doors flung open, the question is whether there is truly open competition between fiber optics and Big Metal.  There is certainly no doubt that fiber optics are faster and more future-proof than metal wiring, which is currently on its last leg, but this question has less to do with physics than it does with business and legal matters.  Simply put, will Big Metal being jumping ship to join the fiber optic future, or will they continue to impede progress as much as they are able? 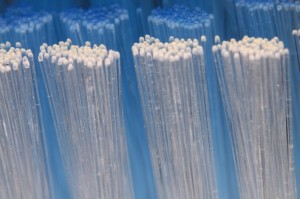 Fiber optic strands up close, thanks to PasuKaru76

In order to answer this question, one has to understand what has happened before.  While these are oversimplifications, they are not misrepresentations as Big Metal would probably have readers believe.  It all started long ago when telephone lines began connecting households and businesses to one another, and eventually to the rest of the world.  Make no mistake about it, this was a monumental undertaking that required serious financing on behalf of Big Metal.  Big Metal is, at its core, a collection of for-profit companies, and thus is only reasonable to expect them to seek the best return for their investments.

After all, Big Metal has to pay salaries, rent, and utility bills just like any other company.  This in turn drives the economy, but the line the Big Metal has inexcusably crossed (and more than once) is that of stifling competition.  Telecoms have been broken up over such accusations, and both telecoms and digital cable providers have seen their exclusivity arrangements made null and void in much the same way.  These actions were usually taken after large-scale consumer upheaval, and the country currently stands at just such a precipice.

Is Big Metal using their powerful lobbying and marketing muscle to stunt the growth of fiber?  There are cases where the answer is incredibly transparent, and sadly it is a ‘yes’ answer instead of the answer most people would want to hear.  If several transparent cases can be found, such as Big Metal vs. LUS Fiber, then how many situations happen behind closed doors, off the record?  Chances are good that there are dozens or hundreds of such cases for every case that shines brightly in the public eye.

Little Guys Can Make a Difference

Despite all of the obstacles thrown at smaller fiber optic organizations, Big Metal has not been able to keep everyone down.  There are some cases where fiber optic connections have been made available despite Big Metal’s efforts.  For example, LUS Fiber has suffered many setbacks on the way to providing Lafayette with high-performance fiber optics.  Another example of this would be the UTOPIA Net family of services that provide similar services to many smaller communities in Utah.  Both of these providers have elected to follow a model similar to Verizon, where customers can receive live IPTV streams over their blazing fast broadband connections.

Why Fiber Optics are Critical to the United States

While the little guys are not out of the woods yet, it would seem that it is only a matter of time.  The truth is that Europeans already have vastly superior broadband access in many countries, and are continuing to advance at a pace that makes the so-called progress of Big Metal look positively lethargic by comparison.  Video, IPTV, and online backup services are already available and capable of using that bandwidth, and the critical app that might require that bandwidth could be right around the corner.  As the disparity grows, the people continue to become increasingly agitated.  This will eventually be bad news for Big Metal, and this brings us back to our initial question: will elements of Big Metal start offering last mile connections made from fiber in the near future, or will they continue to be uniformly opposed to fiber optics despite the growing awareness of their customers?  Will this battle take so long that the bandwidth intensive critical apps start arriving before a resolution is reached?

Nobody can truly answer these questions, but there is a way to influence the answer.  Customers that truly see the value in fiber optics should call their digital cable and telephone service providers and ask when they plan on joining the 21st century by offering fiber optic (FTTH) solutions.  It might also be a good idea to explore the various contracts and agreements that local Big Metal may have with political entities, and get involved in ensuring that these agreements are never renewed.  There are plenty of small companies with big dreams that involve fiber, but until the roadblocks are removed, they cannot move forward safely.  When they do start moving forward, expect Big Metal to start rusting at the seams.